Are you looking for a good pair of ski boots? Tecnica boots may be what you need. These ski boots will outperform most mid-range options and save you money. What could be better than that?

As an illustration, my first ski experience involved a pair of generic no-brand rental boots. I had never been skiing before. I hopped on the ski lift alongside a gorgeous young woman, and we chatted all the way up. Once we reached the top, she said: “See you at the bottom!” and away she went. I suddenly realized I didn’t know what I was doing. I pointed my skis down the hill and closed my eyes.

Because my ski boots were cheap rentals, they were the second things to depart my person. The ski poles and my hat (which came off at the same time) were the first. I tumbled and bounced all the way down that massive slope and must have looked like a snowball with flailing limbs.

That’s when I realized that I needed to learn how to ski, and also that I needed better equipment. So, I started researching different brands.

All About Tecnica Boots

Tecnica boots are just one product in the Tecnica Group’s inventory. Tecnica is a company from Italy. They make outdoor footwear and other gear with which you are probably familiar. Nordica, Blizzard, and the world-famous Rollerblade brands are all part of Tecnica Group. Tecnica’s ski boots are under the Tecnica Alpine brand. You can find their products at most major retailers, as well as Amazon.

Because there are three types of Tecnica boots to choose from, it’s important to know the differences between them. There are Tecnica Mach 1 boots, Tecnica Cochise boots, and Tecnica Ten.2 (pronounced “Ten-point-two”) boots. Note that these boots come in both men’s and women’s sizes. Tecnica has a separate line of boots for children, but we’ll just look at adult Tecnica boots for now.

Although all Tecnica boots will get your feet into skis, the one you need depends on how you intend to use it. You'll want the Tecnica Cochise 120 if you’re a back-woods cross-country skier. The Tecnica Ten.2, meanwhile, features a design intended for people with wider feet who also happen to be aggressive skiers.

Tecnica uses a patented “C.A.S.” material in their shells and liners. This is a type of plastic using micro-cell material which is light and flexible. It is also incredibly strong, reducing surface tension and pack-out. You can form the material using your oven, giving you a precise fit. 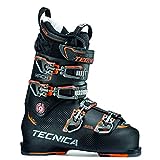 First up is the Tecnica Mach 1 ski boot. These Tecnica boots are for intermediate to advanced skiers. The shell and liner are C.A.S. material. This makes both the boot and the liner anatomically customizable to your foot shape. There is a polyolefin spine which gives more power to your carves. Four adjustable aluminum buckles provide precision tuning, and the soles provide a stable hold on your ski bindings.

Most said that the boots were easy to put on and take off. They did the job for nearly everyone; however, those with wide feet found them uncomfortable. 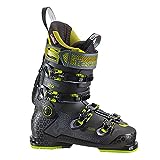 Next, we have the Tecnica Cochise 120 boot. These boots are for cross-country skiing, although you can use them for downhill skiing as well. A rubber toe and heel fit both alpine bindings or pin-style bindings. They offer 45 degrees of movement for comfortable hiking. The company claims these boots are “just as comfortable on the trip up as on the trip down.”

One of the highest rated ski boots in this review. One customer said they were as comfortable out of skis as they were in them. Another customer called them “beautiful boots.” 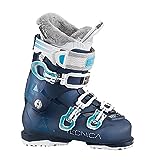 Last is the Tecnica Ten.2 ski boots. Designed for wide feet, these are ski boots made for performance. These Tecnica boots have no buckles. Instead, they use a metal plate which joins the cuff and shell. That gives you great forward lean stability. Made with the same C.A.S. materials all Tecnica boots have, you can mold the form of the shell and liner in your oven, so you’ll never have to worry about a pinch.

Because these are specialty boots, there weren’t many Amazon reviews. Nevertheless, the people who did purchase them were happy. Everyone praised how easy it is to put them on and take them off. They were very comfortable for big feet. 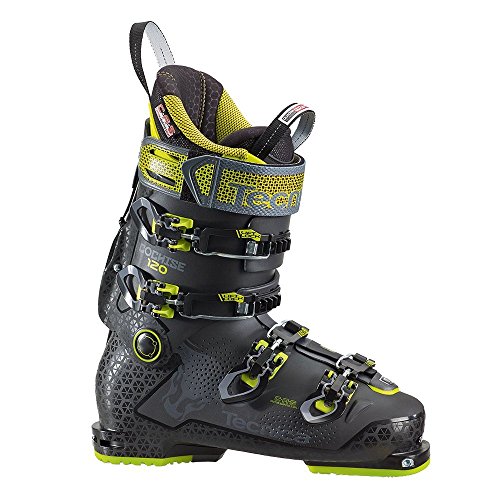 Tecnica boots come with a limited two-year warranty. It would cover all manufacturer defects IF the boots came from an authorized retailer.

This is important. They stand behind their products, and that makes me feel confident about them. I have a hard time trusting companies that don’t warranty their products. When it comes to large purchases and personal safety, a warranty is must-have.

How Do They Compare? 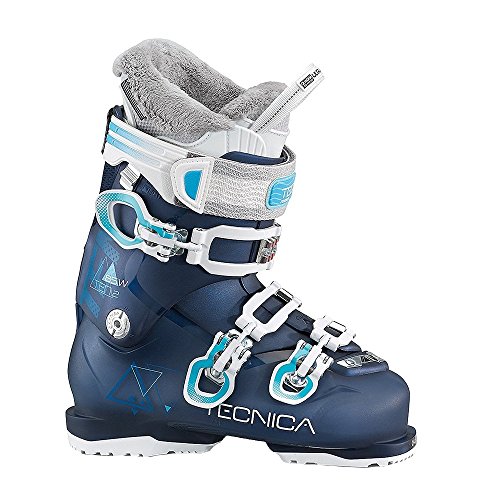 If you’re like me, you’ve probably had a few tumbles on the hill and seriously thought about investing in a good pair of boots. Tecnica boots are well-designed and well-reviewed. They come with a great warranty. But are they better than the competition? How does a Tecnica boot compare to a Rossignol? Can it hold up to a Salomon?

To compare Tecnica boots to the competition, I researched the four most similar ski boots. You’re bound to come across one of these boots in your search. I went to each company’s site to learn a little about them.

Next, I went to Amazon customer reviews. I trust reviews by real people, so I read through a lot of them. I was able to get an idea how these ski boots work in the real world, and how they stack up to Tecnica boots.

First up in our comparison are Rossignol Evo ski boots. Rossignol is a French company. It was founded in 1907 and has become the most popular winter sports equipment manufacturer in the world. Rossignol skis and skiing equipment is featured heavily in the Winter Olympics. The brand is synonymous with “quality.”

The “Evo” line of ski boots is most comparable to the Tecnica Mach 1 boots. Made with a polyurethane shell and cuff, they also include a soft-fabric liner the company calls simply “comfort fit.” They have a 104-millimeter sensor, which compares to the Tecnica boots’ 102-millimeter sensor. The Evo boot is designed to fit most foot types, including wide feet.

Everyone said the boots fit nicely. Men with wide feet praised the comfortable fit. One complaint someone had was that the toe box area of the boot is a little too spacious.

Next up is the Salomon X line of ski boots. Salomon is a French company that’s been around since 1947. It’s a favorite with French Alp skiers and Canadian snowboarders. The Salomon X ski boots are comparable to the Tecnica Ten.2 boots. They are wide and made for aggressive skiers.

These boots are made with a “twin-frame” shell and a 3D liner, providing better power transmission than a lot of other ski boots. They are easy to put on and take off. Two large aluminum buckles secure a front plate to the carbon cuff, providing excellent support.

Some people said that the boots were very comfortable and had great flexibility. One person said he finally had a pair of boots that didn’t hurt his feet! 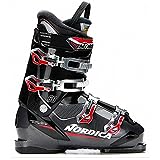 Third on our list is Nordica Cruise ski boots. These compare well to the Tecnica Cochise 120 ski boots. Nordica is a Tecnica Group brand but competes with Tecnica in the upper-mid-range boots. Despite being part of Tecnica’s group, Nordica sells mainly to the US and Canadian markets, and they have a huge presence in Quebec, complete with manufacturing facilities.

Nordica Cruise boots have lots of flexibility, so they’re great for cruising casually down the hill and hitting slaloms. You can hike around comfortably with the flick of a switch. They have a moldable PFP shell which compares to Tecnica’s C.A.S. Because Tecnica owns Nordica, it’s probably the same stuff with a different name.

Everyone wrote that these were roomy and comfortable boots. There were no reports of squeeze or pinch. One person did mention that the boots were a little too flexible for tougher runs. Your mileage may vary.

Finally, we have the Atomic Waymaker ski boots. These are comparable to both the Tecnica Cochise 120 boots and the Tecnica Ten.2 boots. Atomic is an Austrian brand owned by the Amer Sports Group. They own Wilson, Atomic, Precor, and several other brands. You’ve most likely come across their products at some point in your life.

The Atomic Waymaker boots are for wide feet. They have a free/lock mechanism so that you can switch between skiing and hiking. There is a single lateral fit panel secured with a 40-millimeter Velcro strap. The liner is made with 3M “Thinsulate” insulation for cold days. They sell for between $$$ and $$$. All Atomic ski boots come with a two-year limited warranty.

Because there weren’t many customer reviews on Amazon, I went to Google for more reviews. They said they’re very comfortable, but the hike feature was overrated. The boot fits comfortably, but they found them to be heavy and walking in “hike” mode was not that great. 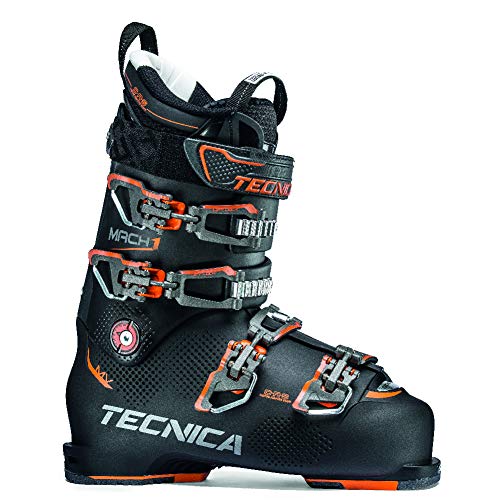 Seeing how two out of three of the ski boots I’ve reviewed were rated highly, it’s hard to figure which one was best. Tecnica boots certainly hold their own against the competition, but they’re not perfect.

Are They Worth It?

Like one customer said on Amazon: “These boots are worth every cent.” Today I make sure to invest good money in good ski equipment. When I was younger, I didn’t care. I wish I had known how important quality was back then. I definitely would have spent the money on a set of Tecnica boots.

If the price is an issue, then go with a pair of Rossignol boots. They come highly rated and are excellent quality. If you can afford it, then buy a set of Tecnica boots. Rossignol’s warranty is only one year. I love that Tecnica includes a fairly decent two-year warranty. Your investment has protection.

All things considered, go with Tecnica boots. You’ll enjoy every moment on the hill!

Nordica Skis: The Equipment Review You’ve Been Searching For