If you're serious about skiing, you need to make sure you are at your very best. The best full tilt boots help you in ways you may have never imagined. After all, when you're buying equipment, you generally think about your skis themselves as well as other gear. But what you have on your feet matters.

The late 1960s and early 1970s was a time of historical events. It ushered in the advent of "hippies," the Watergate scandal, and the beginning of the Star Trek series. It was also when the design blueprint for a new NASA spacesuit took off.

The new spacesuit design was the inspiration behind a new ski boot design that inspired the Flexon Boot. This boot revolutionized the way people ski by giving them more flexibility and control. The ski boot was part of the now-defunct Raichle company.

Fortunately, the company purchased the molds of the original Flexon boot. They kept what worked and improved them with current technology. And the results were astounding/ The company produced high-performing boots enjoyed by recreational skiers and Olympic athletes. With so many Full Tilt boots on the market today, several features make a boot one of the best Full Tilt boots.

What Are Full Tilt Boots?

A Full Tilt Boot is a ski boot that has the ability to flex without a bulge or distortion in its lower shell. This flexing ability gives you more control while skiing. The flexibility is due to a three-piece design: the lower shell, upper cuff, and tongue. The tongue is the most important part of the boot because it allows it to flex naturally, without "bottoming out." Furthermore, the tongue is adjustable. You can change the tongue based on what type of skier you are, the conditions of the day and what type of skis you're using.

What Do Full Tilt Boots Do?

Full Tilt Boots allow you to have more flexibility and control on the slopes. With the three-piece design, the boots move with your feet instead of staying stiff like other boots. Of course, this keeps you comfortable and less prone to injury. With the adjustable tongue, the boots allow you to ski comfortably without limitations from weather conditions or the type of skier you might be.

How Do Full Tilt Boots Work?

The three-piece design of the boots gives them unique flexibility. Governing the flexibility is the tongue. The tongue has a rib design and allows the boot to flex naturally. With traditional boots, skiers often complain of "shin bang." Since the Full Tilt boots are flexible instead of stiff, their design prevents any shin bang. Also, the boots fully cover your shins. This gives you ultimate comfort while on the slopes.

Where Can I Buy Full Tilt Boots?

You can buy Full Tilt boots on Amazon, other online retailers, and authorized Full Tilt dealers. Of course, you should do your research when looking for the best full tilt boot value. As one would expect, some sites will give you better deals than others.

How Much Do Full Tilt Boots Cost?

Full Tilt Boots cost anywhere from $150 to $750, depending on features and performance. However, some of the highly rated boots are less expensive, so with these boots, price does not always equal quality.

How We Reviewed Full Tilt Boots

We looked at the ratings in Amazon and combined the ratings with customer experience we read about on several sites. If Amazon didn't have any ratings for a boot, we used the ratings that we found on FullTiltBoots.com. We did not separate the boots by men's or women's.

Full Tilt boots have an overall price range of $$$-$$$. Naturally, more features and performance mean a higher price tag. Of course, if you take skiing seriously, you'll want to consider the "bells and whistles."

These are the best full tilt boots for 2018 based on customer experience and ratings. We present them in no particular order. 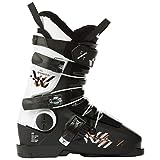 This Full Tilt boot has 5.0 out of 5 stars on Amazon. They are ideal for average to narrow width feet and has a soft flex. Also, the women's cuff has a design that anatomically shapes to match a female's calf shape. Of course, this ensures that the skier has more comfort and control.

You'll love that they are easy to get in and out of and that they have no shin bang. However, they are best for skiers with narrow to average feet width. Because of this, you will need to ensure that the boots will fit.

It has an average price tag of $$$-$$$. You can find the boots on Amazon,  eBay, online retailers, and authorized Full Tilt dealers. 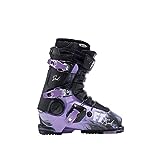 The Full Tilt Soul Sister Women's Boots have a narrow fit and medium flex. The boots offer top performance for the most serious skiers. Next, they have a customizable pro-liner and replaceable soles. Lastly, along with the Women's Rumor boots, they anatomically shape to a female's calf shape. Amazon does not have ratings for them. They have 4.5 out of 5 stars on FullTiltBoots.com.

These boots provide an amazing level of comfort. They keep the skier warm and give you an exceptional level of performance for the price. Unfortunately, some customers said that the women's cuff hurt their shins. Others complained that the liners were too thick and soft. It has an average price of $$$-$$$. You can find them on Amazon, online retailers, and authorized Full Tilt dealers.

This boot is a very high performing one, so much so that Olympic athletes have used it in competition. Whatever task you do, such as bumps, jumps, or rails, the Full Tilt Drop Kick is ready for it. It has a Flex 6 tongue, FTO shell, and is the lightest freestyle boot on the market. Furthermore, it has 4.0 out of 5 stars on Amazon.

Drop Kicks are high performing, comfortable, and light. But some customers say that the boots were too loose, which made them feel flimsy and breakable. The boots have an average price of $$$-$$$. You can buy them on Amazon, online retailers, and authorized Full Tilt dealers. 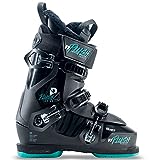 The Full Tilt Women's Plush 4 has a wide fit and soft flex. Also, it has a women's cuff, a flex four tongue, and a classic liner that comes easily on and off. It has 5.0 out of 5 stars on Amazon.

Customers say that they are very comfortable and that they fit well on wide feet. Overall, buyers feel these provide a great value. In fact, we can't find any downsides! These boots have an average price tag of $$$-$$$. You can buy them on Amazon, online retailers, and authorized Full Tilt dealers.

This boot utilizes the classic design that started the Full Tilt company. It is ideal for all types of skiers. No matter what level you are, you can ski in the Classic boots with confidence. Also, it has a narrow fit and medium flex. Furthermore, it has 4.3 out of 5 stars on Amazon. The pros are that it is very comfortable, and customers said that it was good for medium to wide feet. The cons are that some customers had difficulty buckling the boots, and some customers said that water leaked into the boots. The boots are an average of $$$-$$$. You can buy them on Amazon, evo.com, backcountry.com, other online retailers, and authorized Full Tilt dealers.

The Full Tilt Descendant 6 boot has a wide fit and medium flex. Its design makes it very comfortable The design includes a customizable performance liner and shock-absorbing boot board. Also, it has 4.7 out of 5 stars on Amazon.

Customers say that these boots are light, comfortable, and fit great. Unfortunately, some felt that the liner was too soft. The boots average $$$-$$$. You can buy them on Amazon, online retailers, and authorized Full Tilt dealers. 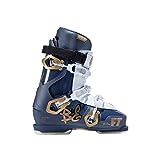 This boot has a wide fit and hard flex. The best feature is the Tour Cuff, which gives added room to breathe at the forefront of the boot. If you have wide feet, you'll be glad to know that these boots are very comfortable for you. Furthermore, it has 4.5 out of 5 stars on Full Tilt Boots.

Customers say that these boots are comfortable, they easily come on and off. In addition, they are light and retain warmth very well. However, some customers complained that they couldn't get the right fit. Some said they were too right, while others said they were too loose. The boots average $$$-$$$. You can buy them on Amazon, online retailers, and authorized Full Tilt dealers.

The Full Tilt Descendant 4 has a wide fit and soft flex. Also, it has a design that forms to all types of feet, so that regardless of your type of feet, you will be comfortable in these boots. Additionally, it has 4.0 out of 5 stars on Amazon. The pros are that the boot is very comfortable, is a great fit for wide feet, and has a sleek look. The cons are that some customers said that the boot was too soft, and some of the parts easily broke. The boots average $$$-$$$. You can buy them on Amazon, evo.com, backcountry.com, other online retailers, and authorized Full Tilt dealers.

At the highest price tag on this list, the Full Tilt Ascendant performs very well in downhill skiing. Known as the all-around boot, it has a tour cuff and tour pro liner that helps you perform all day long. Also, it has a wide fit and hard flex. Lastly, it has 5.0 out of 5 stars on Fulltiltboots.com. Amazon has no reviews of this boot. The pros are that the boot is comfortable, durable, and some customers said it was the best boot they ever wore. The con is that they are not the lightest boots on the market. The boots average $$$-$$$. You can buy them on Amazon, evo.com, other online retailers, and authorized Full Tilt dealers.

This boot has a narrow fit and hard flex. Also, it has features that make it versatile on the slopes. These include a pro liner, Flex 10 tongue, and all-metal buckles. Furthermore, it has 5.0 out of 5 stars on Fulltiltboots.com.

Customers say these boots are comfortable, versatile, and adaptable to all types of skiing. But some complain that the buckles are low quality, and the boots didn't fit their feet well. These average $$$-$$$. You can buy them on various online retailers and authorized Full Tilt dealers.

Our Pick for the Best Full Tilt Boot

After looking at customers reviews, features, and price tag, we picked the best boots, separated by men's and women's boots. The best Full Tilt men's boot is the Descendant 6. It is very comfortable, and its shock absorber makes it stand out from the rest of the boots. Finally, its ratings and price tag combine with the rest of the features to make it the best Full Tilt boot for men.

The best women's boot is the Women's Plush 4. Its combination of features, five-star ratings, and price tag make it the best Full Tilt boot for women.